Are You Saying These Words Wrong?


How do you say pecan?

In my home, the correct pronunciation for this five letter word is a great source of debate.  I say "pick-AHN" and my husband says "pee-KAHN."  Both of think we are right, so the debate continues.  It usually goes like this:

Well, it turns out, my husband was on to something...the area where you live likely dictates how you pronounce the word pecan. Check out this map. Joshua Katz, a graduate student studying statistics at North Carolina State University, used data to map out food dialects.

He found that pee-KAHN is dominant nationwide, but in areas of north Texas, Oklahoma, Louisiana and Mississippi, pick-AHN reigns supreme.  PEE-can is popular on the East Coast, while people from Wisconsin, northern Minnesota and Michigan's Upper Peninsula go with PEE-kahn. 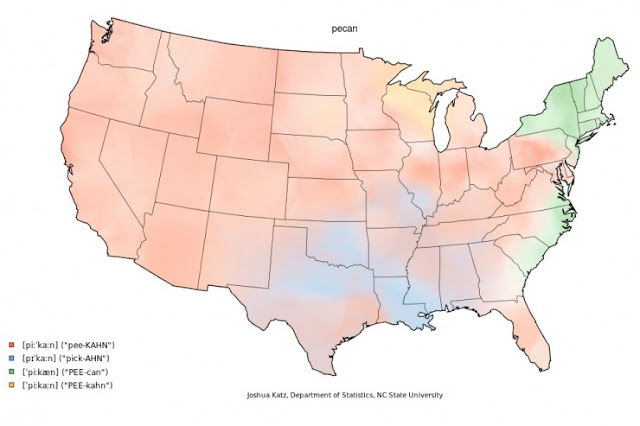 Does your pronunciation of the word pecan correspond with the part of the country you live in? In our case, the map was spot on. I was raised in Louisiana by parents from north Texas, therefore, we say "pick-AHN." My husband, on the other hand, has lived his entire life in Corpus Christi, Texas, and just like most others in the region, he says "pee-KAHN."

While there is no one single correct way to say pecan, one thing is for sure, Standard American English pronunciation can be a tough nut to crack.  Good luck!

Family is like pecan pie- something sweet holding all the nuts together.
Unknown