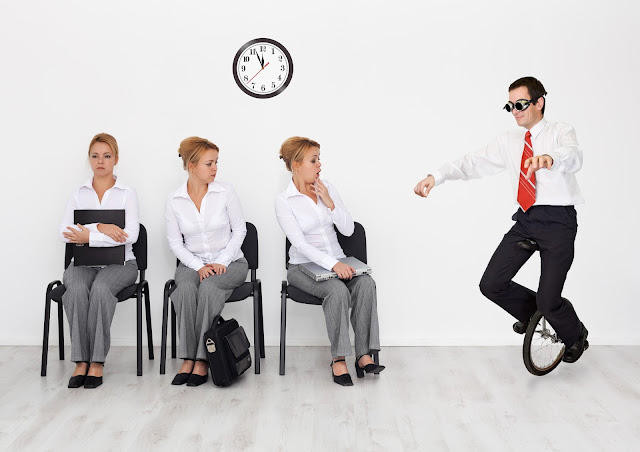 You Don't Need a Unicycle
to Stand Out From the Crowd


Last week, I met with a new client. He's been out of college for about 9 months, has gone on several job interviews, but in the end, he's still unemployed. Uh oh!


On paper, the young man looks terrific- he attended a major university, he worked through college and he received a professional degree that is in rather high demand. Now, nearly one year later, he told me he is applying for job at a temporary agency as a data entry clerk...a job that is clearly below his training.   His parents suspected that his job interviewing skills needed some work, so they encouraged him to get help from a professional communication coach.


Even though he had several theories as to why he was still jobless, I wasn't buying any of them. In a matter of minutes, I summed up his problem:  poor communication skills.  I don't have any magical powers,  but I recognize a problem when I see and hear it. Here's what I mean.

Within 5 minutes of our introduction:

During the remainder of our time together, he made a few other faux pas:


I don't think this young man set out to make a bad impression, it just kind of happened. If he had done one of these things at an actual job interview, the interviewer could have probably overlooked it.  However, a variety of awkward moments could be the reason he still hasn't landed his first job.

What kind of impression to you make when you meet someone new?  Strong communication skills, including good verbal and non-verbal abilities, will help you stand out in a variety of situations.  How do you do that?  Check back for part two of this blog:  The Dos and Don'ts for Making an Outstanding Impression During an Interview.


In the meantime, if you would like to know more about improving your interviewing skills with the help of a speech coach, give us a call at (361) 271-1600 or send an email to melissa@SpontaneousSpeech.com.  We're happy to chat and answer any questions you may have.

You will never get a second chance to make a first impression.
Will Rogers